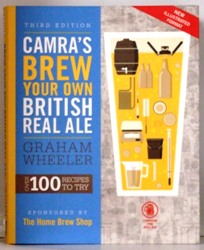 Sorry, this item is currently out of stock. We are ordering weekly, but do not know when it will be available.
0 in your basket
View Basket Checkout
This is the most up to date version (2014 reprint) of Graham Wheelers superb book containing recipes to allow you to produce "clones" of over 100 of the most popular real ales currently available from British Brewers. They have changed the layout to make it easier to read and follow the recipes and there are many "real" photos and full colour illustrations to clarify the various procedures used.
Amongst long standing favourites from previous versions such as Courage Directors, Marstons Pedigree, Timothy Taylor Landlord and Flowers Original, there are new entries such as Adnams Broadside, Black Sheep Riggwelter, Caledonian Deuchars and Old Speckled Hen.
Many of these recipes include instructions on how to brew them using malt extract rather than the full grain method and those that don't can easily be converted by using the FREE "Beer Engine" software that can be downloaded from Graham's website.
The "theory" of brewing is covered but kept deliberately simple so that newcomers aren't put off, but is sufficiently comprehensive to enable ALL brewers to feel confident enough to take the plunge and move on from kit brewing.