Brewing using a single can beer kit:
Commercial beer is usually made from a mixture of Pale Malt and roasted malts that are used to provide colour and flavour. Home Brew beer kits are made from concentrated Malt Extract and almost all single can/pack beer kits contain 1.5-1.8 kgs of malt extract. This malt extract needs to be diluted with water to make a 5 gallon/23ltr sugar rich mixture and then fermented. (If you have a two can kit you can still follow MOST of these instructions but some differences in technique apply)
These instructions are based on the Brewbuddy Bitter Kit that is supplied with our standard Starter Kits. If you are using a different single can kit you should follow the maker's instructions as they may vary from these instructions, but the general principle will be the same. (The Brewmaker range of single can differs from these instructions in that it requires you to actually simmer the malt extract in boiling water for 5 minutes before adding to the brewing bin and topping up with cold water). If you are using a Two Can Kit rather than a Single Can kit you will not need to add any additional sugar or spraymalt until you get to the bottling or barrelling stage.
Getting going:
Remove the label from the beer kit and place the unopened beer kit in hot water to soften the Malt Extract. Most single can beer kits have the brewing instructions on an instruction sheet which is either under the cap with the yeast sachet or inside the box, (eg Hambleton Bard), but some, including the Brewbuddy, Perfect Pint and Youngs Harvest ranges, have them printed on the can label, so care should be taken to check before ripping the label off......
Sterilise the brewing bin, and all the other equipment to be used, using a proprietary sterilising agent for the specified amount of time. Generally 10-15 minutes is sufficient. I've got my can opener, heater (making sure I keep the plug completely dry), thermometer, hydrometer and test jar going into the bin here. Don't forget to sterilise the lid of the brewing bin. The lid used in these photos has a hole in the top which takes the bung for an airlock or to allow my thermostatic heater through. ( 2014 update - As a result of a change in the design of the heaters, the ones currently available are marginally too big to fit through the hole for the bung and as a result I have now cut a notch in the rim of the bucket using a "Round File". This notch is approximately 5-6mm deep and allows the cable from the heater to pass over the rim whilst still allowing the lid to be properly sealed in place.)
Rinse the bin with clean water and drain. Open the beer kit and empty the contents of your chosen beer kit into the brewing bin and add 3 litres/6 pints of boiling water.
Holding the empty can with a tea towel, half fill it with boiling water and swirl it around to dissolve the remaining malt extract and clean the can. The tea towel stops you burning your hands or dropping the wet can and spilling the hot, sticky contents all over the floor. 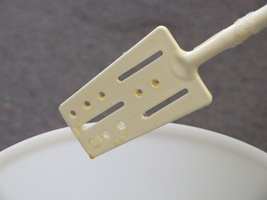 The beer kit instructions tell you to add 1kg/2.2lb of sugar at this point and mix thoroughly to ensure that the sugar and malt is completely dissolved.
If you are making a two can kit, add the second can and leave out the sugar. Add 19 litres/33 pints of cold water to bring the volume up to 23 litres/5 gallons.
I prefer to mix the malt extract in the hot water using the long handled spoon until fully dissolved and the spoon looks like this..........
and then top up the brewing bin to the 20ltr mark. By stopping here and checking the temperature, you can either raise it to the target temperature by adding a couple of litres of hot water, or cool it down by topping it up with cold water. It is far better to adjust the temperature in this way so that the yeast can be added to the wort (the malty, sugary liquid) as soon as possible rather than leaving it open to the air and running the risk of absorbing any airborne infections. As you can probably see from the photo, I tend to use Tesco's Value Still bottled water in my brewing. This is because I live in a "hard water" area and my tap water can contain large amounts of calcium and often has a strong chlorine taste. If you are lucky enough to live in a "soft water" area, or don't mind the taste of your local water, you can happily use your local water instead of bottled water.  The bottled water has another advantage in that you can, if you wish, save the bottles and use them to store your finished brew.
This is the point at which I tend to add the sugar (unless, of course, I am using a two can kit in which case NO sugar is needed at this point). In these photos I am using Brewing Sugar which is much finer than normal granulated sugar and promotes a quicker start to fermentation and a smoother finish to the beer. Soft brown sugar can also be used and will slightly darken the colour of the finished beer and give a richer flavour. Even though we have so far tried really hard to avoid airborne infections getting into the wort, it is important to stir the wort vigorously for a couple of minutes to get some oxygen into it as this help the yeast to function properly. I generally now take a sample of the wort in the test jar and use the hydrometer to determine the "Original Gravity". This is simply a measure of the total amount of sugar in the wort and gives an indication of the potential strength of the finished beer. (This particular brew had an OG of 1040, which means I should end up with an ABV (alcohol strength) of approximately 4.3%). 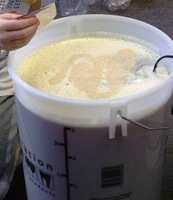 When the temperature cools to between 18º-23ºC sprinkle the yeast over the surface of the liquid and stir to disperse. If the mixture is too hot, the yeast may be killed off and fermentation will fail.
Some kits recommend making up and using a yeast "starter". This simply means putting the yeast in a cup of warm water in which a few spoonfuls of sugar have been dissolved and leaving for 15-30 minutes to get going. Doing this about 30 mins before you start to brew means that when you add it to the brewing mixture it will start fermenting more or less straight away and reduce the risk of infection. It is not absolutely necessary, but it is good practice and will do no harm.
Cover the brewing bin with the lid provided and place in a warm, draught free location where the temperature is likely to remain stable at around 18º-21ºC. If you have a thermostatically controlled heating element or a brewbelt (a flexible heater that wraps around the outside of the brewing bin rather than being inserted into it), you can place the beer in a garage or shed so that it is out of the way. Within 24-36 hours, a deep, frothy head will have formed on the surface as the yeast starts to eat the sugar and convert it to alcohol. Leave it for 4-6 days to ferment. The third picture below shows my brew on day four when it has calmed down a bit. When fermentation starts to slow down and bubbles can no longer be seen rising to the surface, and a scummy brown ring of dead yeast cells has been left around the inside rim of the brewing bin by the receding froth, check a sample of the beer with the hydrometer. It should read around 1008-1005 for this kit, though this will vary depending on your starting gravity and you should take always note of the manufacturer's suggested finishing gravity. 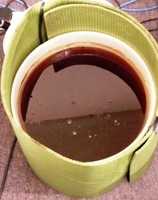 In the final photo above, fermentation LOOKS as though it has stopped. Checking it with the hydrometer gives a reading of around 1020, which is much too high and suggests that the yeast has stopped working because of the extreme cold temperatures. (I brewed this batch at the beginning of February)
Despite using a thermostatic heater set at 20ºC, the back room of my shop has been losing too much heat at night and this has adversely affected the action of the yeast. To overcome this, I wrap the brewing bin in an old insulated foam camping "carrymat" and leave it for a few more days. In the end, I actually had to use a sachet of "Restart" which is a mixture of yeast and yeast nutrient to get this brew moving again.

A few days later, the fermentation has eased off again, and by checking with the hydrometer I found that the Specific Gravity had fallen to 1008. The finishing gravity will be lower than 1008 if you have used granulated sugar and higher if you have used beer enhancer or spray malt. If you check your brew and you find the same reading two days running, primary fermentation can be considered to have finished and you should raise the bin to table height to allow you use the syphon tube to transfer the beer to the sterilised bottles or pressure barrel. It WILL be heavy (around 35kgs) so care should be taken when lifting it off the floor. At this point, finings can be added if you wish to speed up the clearing process. Your beer will naturally clear, but some brewers prefer to reduce the amount of sediment prior to transferring their brew into their preferred storage medium.
Some home brewers use 1 pint glass bottles, which need to be sealed with crown caps, 1 litre PET bottles (Tonic, Bitter Lemon or Ginger Ale bottles are ideal. - Guess what I drink when I haven't got a barrel of beer on the go !!!), or the 2 litre empty water bottles to store their beer as the beer clears more quickly in smaller quantities. Others prefer a use a barrel as the beer matures better in large quantities and extra gas can be added if needed to maintain serving pressure. Furthermore, a barrel requires less effort to clean and sterilise than 40 bottles. I use a mixture of both methods. Bottles are much easier to put in the fridge than barrels which is obviously an important factor when serving Lager, but anything bigger than 1 pint or 1/2ltr will need to be decanted into a jug or another bottle as soon as you open it as you will disturb the sediment and lose all the CO2 pressure.